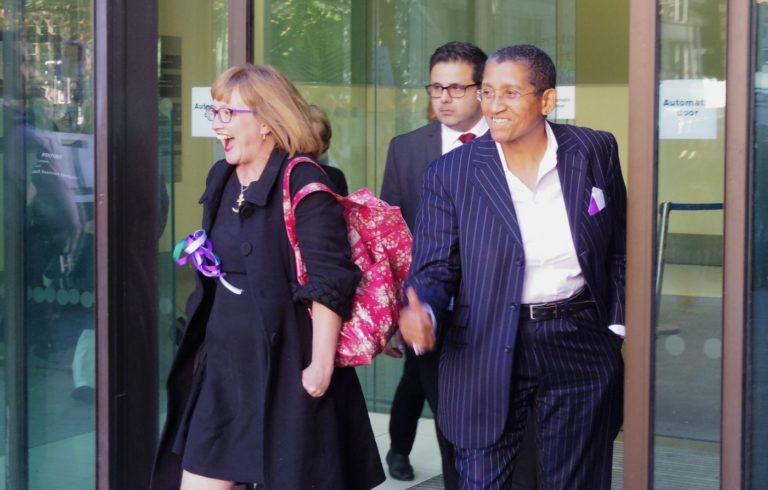 Linda Bellos OBE, a leading feminist and anti-racist campaigner, represented by Gudrun Young, appeared today in Westminster Magistrates Court to be informed that the private prosecution against her had been taken over by the CPS and discontinued.

Linda Bellos faced an offence of using threatening, abusive or insulting words or behaviour contrary to section 5 of the Public Order Act 1986. The alleged offence arose out of an event called “We Need to Talk” which took place in York on 8th November 2017. This was a public political meeting arranged specifically to debate issues arising out of the proposed changes to the Gender Recognition Act 2004, as part of a Government consultation process. These changes would make it much quicker and easier for trans people to legally change their sex by a simple process of “self-certification”.

Linda Bellos made certain remarks at the debate which she has claimed were simply a statement that she would defend herself against a trans woman who threatened violence towards her (in response to an incident that had occurred previously when a trans woman assaulted a 60 year old feminist at Speakers Corner in Hyde Park).

The event was live-streamed on Facebook by Venice Allan, who also appeared as a co-defendant charged with an offence contrary to section 127 of the Communications Act 2003.

Giuliana Kendal, a trans woman, who had been watching the live-streaming of the debate, complained to South Yorkshire Police that she found the remarks threatening as a trans woman.

South Yorkshire launched a full investigation into the matter, including interviewing Linda Bellos under caution. On 8th May 2018 Giulian Kendal was informed that the CPS had reviewed the matter at a high level and decided that there was no realistic prospect of conviction, taking into account the context in which the words were uttered and the fact that Linda Bellos would have a defence of freedom of speech under Article 10 of the ECHR.

Despite this, Giuliana Kendal decided to bring a private prosecution against Linda Bellos and Venice Allan. Detailed representations were made to the CPS inviting them to exercise their statutory powers to take over and discontinue the prosecution on the grounds that neither the evidential sufficiency or interests of justice test of the Code for Crown Prosecutors were met, that it was a politically motivated and vexatious prosecution, and that Giuliana Kendal was incapable of fulfilling her duties as a prosecutor in a fair and impartial manner.

Today the CPS took over the prosecution and discontinued it.

Giuliana Kendal indicated in court that she would be seeking judicial review of that decision.

Background To The Case here

Declaration of no confidence in LGB movement leadership WOLF