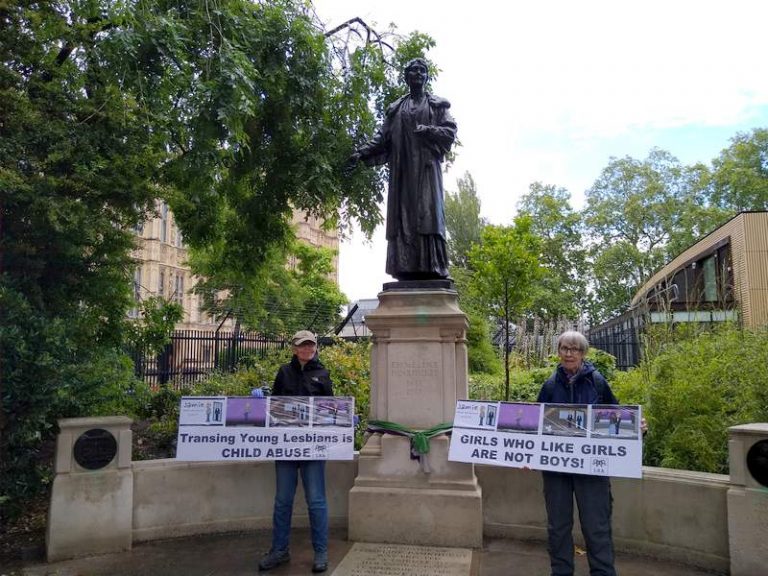 I am writing to you as the Chair of the Lesbian Rights Alliance (LRA) following your recent statement to the Women and Equalities Committee.

First of all, we would like to say we welcome your statement to protect single sex rights. This is something that our organisation has been campaigning about for several years. We also note that you refer specifically to the rights of transgender adults to live their lives ‘without persecution, while maintaining the proper checks and balances in the system.’ We hope we can assume from this that there will be no lowering of the age at which young people can seek gender reassignment.

We therefore welcome your statement about protecting under 18s from making decisions that are ‘irreversible in the future,’ and the recognition that such young people’s decision-making capacities are still developing. As the LRA we have been particularly concerned that same sex attracted girls and young women have been subjected to medicalised ‘gay’ conversion therapy and we wrote to your predecessor, Penny Mordaunt about these horrendous medical practices, which we hope will come to an end. But there remain thousands of young lesbians seeking to transgender and it is because of our concerns about this and our contact with parents who have lesbian daughters, that we would like to draw your attention to the statutory guidance to schools on Relationships and Sex Education, which is supposed to come into force in September, 2020, but in many schools is already being implemented.

School Guidance on LGBT issues and Stonewall. The guidance requires primary and secondary schools to have policies and teaching programmes on the protected characteristics in the Equality Act, including on LGBT issues. It references a specific LGBT organisation, Stonewall for advice and teaching resources on this. We find this extremely worrying as Stonewall’s main aim has been to promote transgender ideology for the last few years. It has not addressed the interests of lesbians or recognised that both sex and sexual orientation are protected characteristics in the Equality Act. For instance, it has redefined ‘same sex orientation’ as ‘same gender orientation,’ ignoring its legal definition.

This redefinition has caused considerable problems for young lesbians in schools who have rejected feminine stereotypes. Many of these girls have been subjected to bullying and harassment in school and been told they are really boys, leading them to seek social and medical transition. Further, Stonewall has ignored girls’ legal rights to single sex facilities in schools in order to protect their privacy and safety. This has been illustrated in the CPS guidance and teaching pack to secondary schools on hate crime. The LRA wrote to the CPS about this in February 2020 (attached) and this guidance has been temporarily withdrawn because of a legal challenge supported by the parents’ organisation the ‘Safe Schools Alliance.’

The Stonewall resources for primary and secondary schools Having examined the Stonewall resources we have the same concerns. In looking specifically at the resources for the primary curriculum it is clear that Stonewall’s main agenda is to tell all children from the age of four upwards that they are born with a ‘gender identity,’ that can be different from their sex. We think children should be safeguarded from being taught this harmful ideology that has no basis in biological fact and has resulted in confusing children about their own sex and to unsafe school policies and practices.
In the following paragraphs we highlight some examples of this from Stonewall’s primary curriculum.

Story Books. Very young children in reception classes and year one, are being told that they can choose to change their ‘gender identity’ if they do not fit the sexist stereotypes of masculinity and femininity. This is illustrated in two key story books recommended for this age group called ‘Are you a boy or are you a girl,’ and ‘Introducing Teddy.’ In the latter book, for example, children are told that Teddy changes from a boy to girl by exchanging his bow tie for a bow in his hair.

Cartoon videos. The Stonewall materials aimed at children aged seven upwards are littered with cartoon videos where girls change into boys and boys into girls. Moreover, these cartoons are being widely promoted in Stonewall’s home learning materials for parents and children under lockdown. These cartoons are supposedly a resource to assist children in an exercise where they are asked to change the ‘gender’ of the main characters in fairy tales. An illustration of this is the cartoon ‘Jamie – a Transgender Cinderella Story.’ In this cartoon Jamie is a girl who is expected to do everything for her lazy brothers. She is very good at fixing things, including motor bikes. When Jamie is not allowed to go to the ball, she decides to make herself a pair of trousers and jacket to go to the ball in and she has the help of mice to cut her hair. She now sees herself as a boy and this is the first time she feels right. She goes to the ball as this new persona and she and the princess feel attracted to each other and get married. The message of this video is that if you are a girl who defies sexist stereotypes and you are attracted to your own sex, you are not a lesbian but a boy born in the wrong body. Thus, far from encouraging acceptance and respect for young lesbians, Stonewall turns them into heterosexual boys.

Health Education and other aspects of the primary curriculum. In health education, the Stonewall resources state that when being taught about specific biological facts children should be told that ‘most’ girls experience periods, implying that some boys can experience them as well. All this unscientific nonsense even extends to gay issues. In another story book aimed at four and five year olds ‘And Tango makes 3,’ two male penguins hatch an egg, which results in the baby penguin, Tango. Since males cannot reproduce eggs young children must be very confused about the biological facts of this story. In the English curriculum children are told that sometimes ‘they’ and ‘them’ can be used as singular pronouns, because some transgender persons prefer to refer to themselves in this way.

Sexism In contrast to this wholesale promotion of transgenderism very few of Stonewall’s resources actually challenge sexism or sexist stereotypes, despite this being highlighted as a significant issue in the Department of Education guidance. In contrast, Stonewall chooses to cement sexist stereotypes in schools by using pseudo-scientific explanations, such as the ‘born in the wrong body’ narrative for the children who do not conform. It is also pertinent to note that only a fifth of teachers have had any training in challenging sexist stereotypes.

In conclusion we think that the current statutory guidance to schools and local authorities on LGBT issues should be immediately withdrawn. There is ample evidence from parents’ groups and some pupils themselves that such resources which focus mainly on transgender ideology is harmful to children. This is indicated not only from the resources provided by Stonewall, but many other LGBT pro-trans organisations which are flooding schools with transgender materials and providing misleading and false legal information on gender reassignment, as well as ignoring other protected characteristics in the Equality Act. A recent legal challenge against Oxfordshire County Council has forced it to withdraw its guidance to schools based on a programme called ‘Allsorts Trans Inclusion Schools Toolkit’. This ‘toolkit’ ignores girls’ rights to single sex facilities and the legal challenge was brought on this basis. Many other local authorities using this toolkit have also withdrawn their guidance because of this case.

However, parents are also concerned about their children being taught transgender ideology. For example, parents’ groups responding to the ‘No Outsiders’ programme being taught in primary schools in Birmingham, were saying that their daughters were coming home from school and asking them if it was okay if they became boys.

Parents have reported to the Lesbian Rights Alliance that primary school teachers have asked them what pronouns they should use with their child, when they have sent daughters to school for the first time, wearing trousers and having short hair. We have been approached by parents anxious about their adolescent daughters who have initially defined themselves as lesbians, but then have been referred by school staff to organisations that support medical transition such as Mermaids. These parents have often had to seek out psychotherapists to reassure their daughters that being lesbian does not mean they are transgender.

We are therefore asking you to act urgently on this matter, despite the lockdown, in conjunction with the Gavin Williamson as the secretary of state for education.

Dr Lynne Harne
on behalf of the Lesbian Rights Alliance