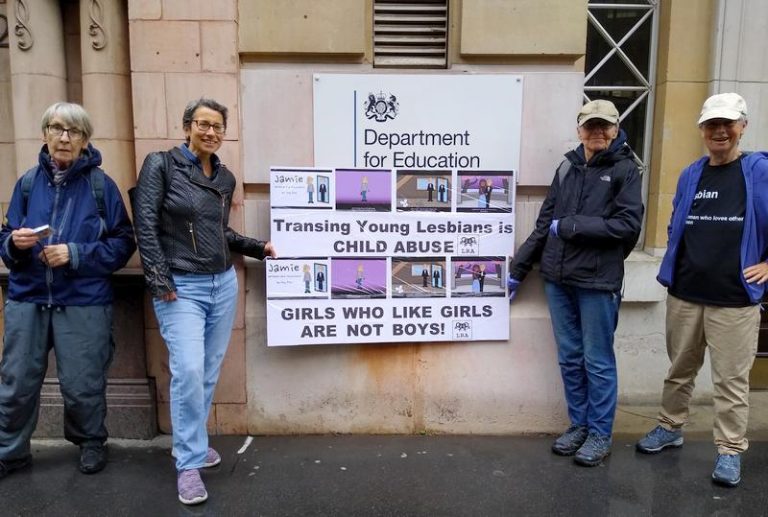 For the attention of Gavin Williamson, Secretary of State for Education.

I am writing as the Chair of the Lesbian Rights Alliance (LRA) to express our concerns about the statutory guidance to schools on Relationships and Sex Education, 2019 and  in particular, the guidance on LGBT issues.

We are very concerned that this guidance refers schools and local authorities to the LGBT organisation Stonewall, for guidance and resources in this area. We find this extremely worrying as Stonewall’s main aim is to promote transgender ideology, rather than to protect lesbian equality rights.

It has not addressed the interests of lesbians or recognised that both sex and sexual orientation are protected characteristics in the Equality Act.

For instance, it has redefined ‘same sex orientation’ as ‘same gender orientation,’ ignoring its legal definition. This redefinition has caused considerable problems for young lesbians who do not fit the sexist stereotypes of femininity in schools.

Many of these girls have been subjected to bullying and harassment in school and been told they are really boys, leading them to seek harmful medical transition, much to the distress of their parents.

Stonewall were employed to develop the recent CPS guidance and resources on hate crime for secondary schools. This guidance has now had to be withdrawn because of a legal challenge, supported by the Safe Schools Alliance which demonstrated that the guidance ignored equality and human rights legislation.

The LRA also complained to the CPS about these materials as they were clearly homophobic towards lesbians.

Having examined Stonewall’s resources for primary and secondary schools we have similar concerns. In looking specifically at the resources for the primary curriculum it is clear that Stonewall’s main agenda is to tell all children from the age of four upwards that they are born with a ‘gender identity,’ that can be different from their sex.

We think children should be safeguarded from being taught this harmful ideology that has no basis in biological fact and has resulted in confusing children about their own sex.

This is illustrated in key recommended story books which tell very young children they can choose to change their gender identity if they do not fit the sexist stereotypes of masculinity and femininity.

For example, the story book ‘Introducing Teddy,’ tells children that Teddy changes from a boy to a girl by wearing a bow in his hair, rather than as bow-tie round his neck.

Video Cartoons. The Stonewall materials aimed at children aged seven upwards are littered with cartoon videos where girls change into boys and boys into girls. Moreover, these cartoons are being widely promoted in Stonewall’s home learning materials for parents and children under lockdown

(https://www.stonewall.org.uk/home-learning-packs-stonewall.) These cartoons are supposedly a resource to assist children in an exercise where they are asked to change the ‘gender’ of the main characters in fairy tales. An illustration of this is the cartoon ‘Jamie – a Transgender Cinderella Story.’ In this cartoon Jamie is a girl who is expected to do everything for her lazy brothers. She is very good at fixing things, including motor bikes.

When Jamie is not allowed to go to the ball, she decides to make herself a pair of trousers and jacket to go to the ball and has her hair cut by mice. She now sees herself as a boy and this is the first time she ‘feels’ right. She goes to the ball as this new persona and she and the princess feel attracted to each other and get married.

The message of this video is that if you are a girl who defies sexist stereotypes and you are attracted to your own sex, you are not a lesbian but a boy born in the wrong body. Thus, far from encouraging acceptance and respect for young lesbians, Stonewall is turning them into heterosexual boys and practising ‘gay conversion therapy,’ in the process.

Parents Views. Parents groups in general are very worried about their daughters coming home from primary school, asking if they can become boys, after being taught about transgender ideology. The Lesbian Rights Alliance have been approached by several parents concerned about what is happening to their adolescent lesbian daughters in school and how they have been encouraged to socially and medically transition by being referred to homophobic organisations such as Mermaids. You must be aware that over 2000 girls a year are now seeking to medically transition, with the vast majority being same sex attracted. There is also a government review of this type of ‘gay conversion’ therapy taking place at the Gender Identity Development Clinics.

We therefore recommend that there should no teaching on transgender ideology in schools and the current statutory guidance to schools on LGBT issues should be immediately withdrawn, as it is harming children.