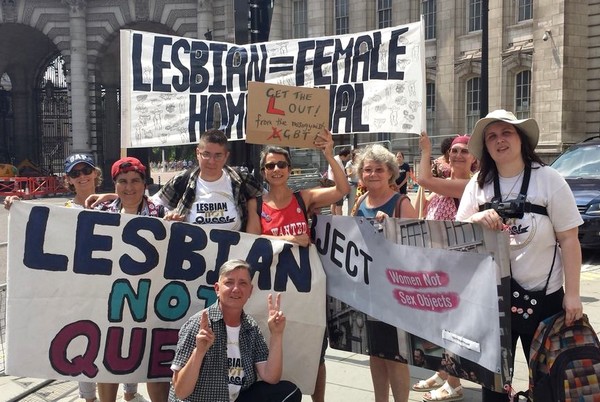 A Love “Letter” to My Sisters Who Made a Difference

It was the evening of Pride 2012 and I found myself in unlikely company, three-months pregnant sitting in the middle of one of Soho’s busiest pubs. No sooner had I taken a seat with some new acquaintances, one woman sat next to me and spent the evening telling me how transgender politics had entered into the Labour Party, taken over certain local councils and how this lobby had placed lesbians in its crosshairs attempting to convince young lesbians that women had penises. I was amused at first thinking she might have been a bit mad and/or drunk. Also, as a scholar who had taught queer theory a decade before, while I had no idea as to why the gay and lesbian community had suddenly become saddled with something that had nothing to do with sexuality, I couldn’t imagine it had gone to the extremes that this woman described. At best, what was often called “transsexualism” had everything to do with a form of body dysphoria or dysmorphia yet bizarrely this lobby had somehow hitched its political narrative to ours.

The very next day I set out to read about what this woman had told me only to discover that every word she had recounted was entirely accurate. Indeed, there was an assault on women’s rights coming from the very quarters of gay and lesbian activists—my people. “How had my community,” I thought, “come to buttress a narrative that is so perversely homophobic, misogynist and regressive? Hadn’t we moved away from gender stereotypes in addressing sexuality?” Then six months later the Suzanne Moore and Julie Burchill firestorm took place and the scales quickly fell from my eyes. As I was to find out over the next eight years, the battle had just begun.

And so it came to pass that on Tuesday the British government has officially abandoned its plans to amend the Gender Recognition Act 2004 which would have allowed for people to change their legal gender without the approval of doctors and other legal officials.

As the Spectator columnist James Kirkup has written, women have indeed won the war on gender “self-ID” however the brunt of the work was not won by any one group of women who organised around the consultation on the GRA reform, nor was it any of the regular feminist talking-heads that British media loves to recycle as if to make out that in the entirety of the United Kingdom there are only five or six feminists. The truth is that the country has been bursting at the seams with women undertaking feminist actions in recent years specifically addressing the dangers of the proposed changes to the GRA, namely the introduction of gender self-identification. Most every single one of these women has been implicated in fighting the insidious dispersion of gender ideology within most every corner of private and public life in response to the proposed reforms to the GRA. Most impressive is the fact that these women have done so without being named.

Some of them chose to remain anonymous due to their recognition that many other women just like them have collaborated in this project together and that no one woman deserves her name above anyone else’s. Others were forced into anonymity due to the well-documented concern trolls and others who use the legal system vexatiously to shut women’s voices down.

Because of being named, many women have lost relationships with friends, family members, and colleagues. Others have lost employment, scheduled talks, awards, medals, scholarship opportunities, research grants, book contracts, and social media accounts—all for saying that sex is real. Bookmark this article and read it again in twenty years to see how insane the world of 2020 became such that, in terms of the threat to human rights, a global pandemic has taken second seat to gender ideology.

In the promise that we might move away from any political posture that holds dear certain figureheads as sacred cows or de facto leaders, we ought to acknowledge publicly that women fought this battle together, besieged and threatened from all quarters, dismissed, insulted, harassed, legally pursued, made homeless, and booted from lifelong political parties and friendships. Many also engaged in this struggle while being belittled and personally attacked. Some were falsely accused of being paid by or of “cosying up to the conservative right,” others of being a “Holocaust Denier” and one was even called a “Tommy Robinson fangirl.” Some trans activists regularly employ ad hominem in calling women a series of epithets to include more postmodern pseudo-words to deny the biological reality of women, such as “cis”, “womxn”, “cervix-havers” and “non-male.”

If anything, the slagging off of women from all flanks has evidenced one blatant truth: class as much as sex figures highly into who is heard, who is lauded publicly, who is believed, who is represented by the media and who is left to do the unappreciated labour while remaining nameless.

For those who have vituperated the many women who reached across the aisle in the spirit of support to get the job done, I am reminded of what Ruth Bader Ginsburg criticised the useless labels of “liberal” and “conservative” when interviewed by Gwen Ifill several years ago:

The label “liberal” or “conservative,” any…every time I hear that I think of the great Gilbert and Sullivan song from “Iolanthe.” It goes, “Every gal and every boy that’s born alive is either a little liberal or else a little conservative.” What do those labels mean? It depends on whose ox is being gored.

The heroines who shut down self-ID are those women who perspicuously recognised that they would get nowhere by drawing battle lines around political partisanship. Instead, these women foresaw the necessity of putting the human rights of all women first regardless of political affiliation.

It is in the spirit of these women who fought tirelessly and in solidarity against the well-funded machinery of misogyny and class inequality to whom I dedicate this article. It is these thousands of women who deserve all the thanks for their massive efforts.

Among the many anonymous heroines are:

a great many women who introduced the subject of gender ideology into conversations when the opportunity arose either in person or on social media; the women who partook in and organised the event at Hyde Park Corner in September 2017; those who sent out dozens and hundreds of Facebook messages to friends telling them about the dangers posed to women from a potential GRA reform; those who translated forms, articles and letters to collect signatures; those who helped to distribute leaflets; those women who signed petitions and those who engaged in crossing out “gender” on the form and writing above it “sex” or ticking “other” and putting “MY SEX IS FEMALE I DON’T HAVE A GENDER” in the box; the women who wrote their MPs; those who met their MSP; those who presented talks to the women’s network and other meetings in Holyrood; those heroines who stood up for sex in professional networks; those women who sent Transgender Trend packs to schools and teachers; those women active in transgender health Facebook groups; those who donated to the crowd funds of others fighting this battle in the courts; the women who teach their children that sex is immutable; the women who stickered; the women who got a motion through their local Labour Party CLP (constituency Labour Party) to address this issue; those women who created and signed the Labour Women’s Declaration which now has more than 5,000 signatories; those who encouraged women to talk about this issue with others; those who attended and contributed to Woman’s Place UK (WPUK) meetings and Fair Play for Women; those who took part in the Lesbian Rights Alliance; those very special women who crashed Pride; the women (and men) of the LGB Alliance; those women who wore their Fair Play for Women t-shirt out and about while explaining it to people who would stop and ask them for more information; those women who filled in the GRA consultation and those who encouraged their family and friends to fill it in; the women who lost friends and family members in this battle and those who gained friends in the struggle; the women who put their hearts and minds into this effort regardless of other political disagreements; the heroines who have written and sung the songs; the women who originated and continued the good work of Fair Play for Women; those who leafleted their towns leaving flyers in cafes, pubs, local libraries and sports centres; the women and men working within the right-wing press to include the editors without whom we would be so fucked; those who made the many memes and cartoons; those women who complained to quite a few organisations like the NHS and the BBC about lack of balance and the erasure of sex; all the Mumsnetters out there; the women who helped with the prison survey where they examined all the prison reports for Fair Play for Women when the government refused the Freedom of Information request; those women who relentlessly discussed this issue on their Facebook walls explaining how transgender ideology is unfair, sexist, homophobic and regressive whilst embodying religious overtones; all the women (and men) who kept an open mind and allowed theirs to be changed through rational debate; the women who signed petitions and emailed objections; those women who prepared themselves to be unpopular, insulted, and publicly denounced, vilified, defriended and threatened for standing up for the truth; those men and women who recognised that in the crosshairs of gender ideology were the rights of women, children, and gay people; those women from 2013 who used Dark Twitter to discuss these issues and who have since expounded upon this subject through your quite public writing; the women who mentor others as a means to empowering other women; the women in the many private social media groups which served as the secure spaces within which many women uniquely felt safe to speak; the women who researched and debunked the PACE study for which Mermaids had misrepresented the sample size (claiming that 2,000+ trans people when in reality only 27 young trans people formed part of the study) and from which statistics on this subject were based, ultimately highlighting this lobby group’s weaponising of suicide;

The government’s confirmation that there will be no amendment to the Gender Recognition Act 2004 is a collective victory for women which was won because thousands of nameless women knew, deep down, that the right thing to do was to take a stand, to speak out, and even to put up another penis sticker. I am reminded that so many of these women who shared their stories with me have never undertaken any form of political work in their lives. Many more had neither the time nor money to commit their energies to this cause, yet they still they extended themselves.

These heroines persevered notwithstanding numerous political differences they had with other women fighting alongside them and still they stayed the course without resorting to denigration because of these differences. Despite what seemed like an insurmountable struggle, these heroines conducted their actions with aplomb and side by side—left, right, and centre. They have stood in the shadows without expecting any recognition for their labour.

This latest victory over “self ID’ was made possible by these women’s grassroots organising, activism and their refusal to be divided no matter what. While most every one of these women realises that this is one in many future chapters of this battle for our human rights, we should celebrate the unsung heroines of today.

Thank you, one and all.