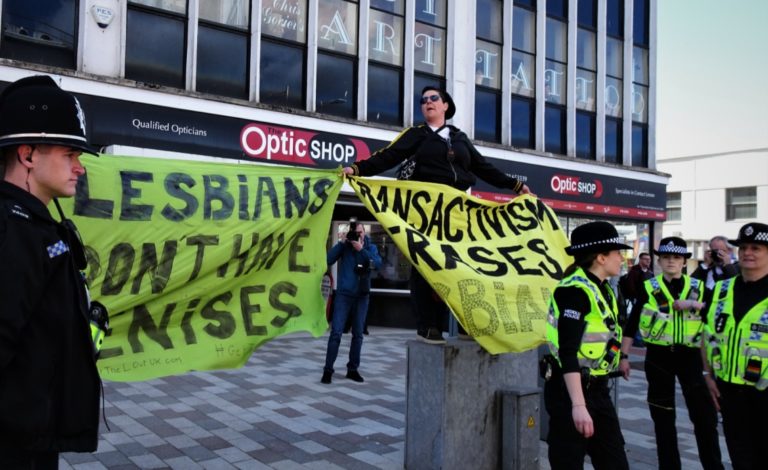 Progressive folk should surely celebrate when a charity promotes the ‘human rights (as set out in the universal declaration of human rights and subsequent united nations conventions and declarations) of people whose experience of sex, gender, sexual orientation and/or sexuality does not align, in whole or in part, with dominant cultural expectations and societal norms and who are therefore vulnerable to discrimination, exclusion, marginalisation, hate crime and lower quality life’ (Gendered Intelligence, Charity Commission).

Most would jump for joy if such worthy aspirations were actually executed on behalf of ALL people who have varied experiences of sex, gender sexuality and who are discriminated against or marginalised. But shockingly, gender identity politics are proving to be extremely discriminatory and exclusionary of women. Currently, in the name of the right to freedom from normative gender – a right feminist movements have fought to claim for centuries – a mutated form of patriarchal oppression is re-asserting itself with vigour, not only through the back door, but full-frontally and shamelessly in many of our institutions and political parties. In essence, gender identity politics and the LGBT movement are not concerned to defend the sex-based rights of women but are rapidly becoming the latest 21st century versions of men’s rights to define ‘Woman’, to silence women’s self-definition and to demonise women if they speak up.

Some current examples will suffice to demonstrate my point, although example from the last few years are legion. Maya Forstater, a tax expert and senior researcher, has not had her contract renewed by the company for which she works because of her ‘tweeting and writing about sex and gender identity, and sharing campaign material about the negative impacts of the proposed policy of ‘gender self-ID’ on women and girls’. She is now taking the organisation to the Employment Tribunal for discriminating against her because of her beliefs. She reminds us ‘this will be an important test case in the UK on whether having ‘gender critical’ beliefs is protected under the Equality Act 2010 (in the same way as other religious or philosophical beliefs). She describes the mechanisms by which we are both silenced by others and silence ourselves:

Women wanting to speak about this issue have been no-platformed, ostracised and dismissed from organisations that would normally hold open the space for debate. Many have been removed from social media. Others stay quiet or anonymous in their concerns for fear of damaging their livelihood and career. Some avoid the topic out of a desire to be kind, or because it is controversial and they fear saying the wrong thing or opening themselves up to being called ‘transphobic’ or hateful.

Lily Madigan a young trans identifying adult, born male and socialised as masculine and who is the Labour Party women’s officer for Rochester and Strood has ‘eloquently’ contributed to the conversation on Twitter. Madigan tells Forstater ‘Go fuck yourself’. 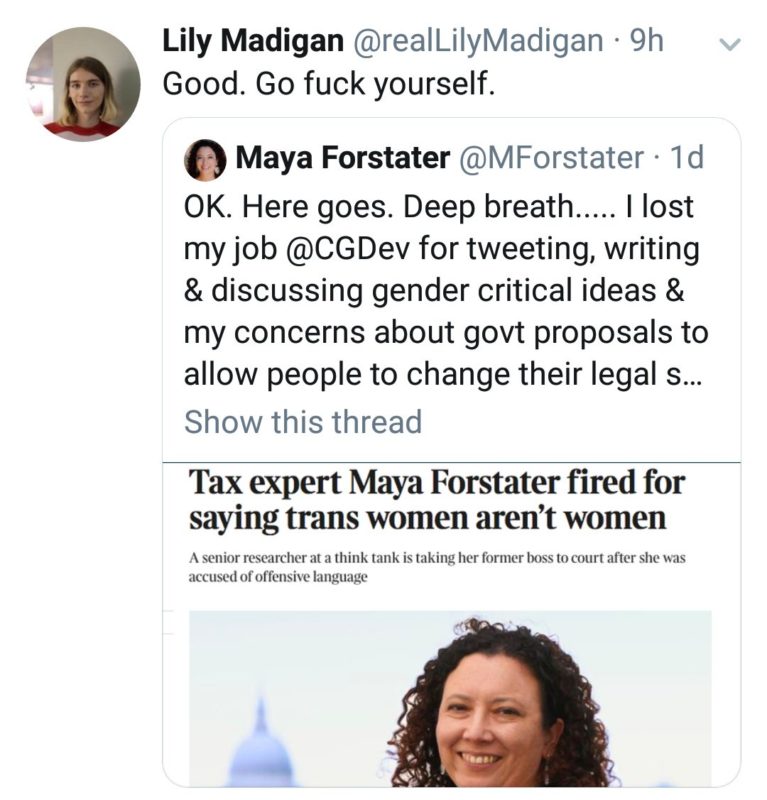 Madigan has a history of bullying gender-critical feminists and other women. An earlier Twitter missive states that TERFs ‘can go fuck themselves’, and this language was allowed with impunity not only by the Party but by Twitter itself. To date Dawn Butler, the Women’s and Equalities Shadow Secretary, has not intervened in this latest outburst to categorically state the Labour Party will not tolerate their representatives speaking about women in this way.

Get the L Out is a group of lesbian and feminist individuals and organisations, who oppose the increasingly anti-lesbian and misogynistic LGBT movement and the erasure of lesbians. Through holding their rightful place at Gay Pride marches, lesbians bring powerful attention to the myth that lesbian women are embraced by LGBT. At the recent Swansea Gay Pride they marched with banners which stated: “transactivism erases lesbians” and “lesbians don’t have penises”. They walked in front of the march but backwards so that the banners would be visible to the demonstrators. They were bodily removed from the march by the police on the ‘grounds’ they were ‘spoiling it’. Angela C. Wild, one of the demonstrators here has said to me:

For years lesbians have been trying to raise awareness on the clash of rights between the trans ideology and women’s rights to women only spaces. The particular issues faced by lesbians is that of course the women-only space we are talking about is our own bodies and our rights to sexual boundaries. Our actions, conferences and research have been ignored, dismissed, minimised. Now that the GBT realise they cannot ignore us anymore they are trying to silence us by demonising us, interpreting out rights to refuses penis as “hateful”, “terf”,) even “Nazis” and passing our peaceful protest as “acts of terrorism” when all we ask is to be left alone.” 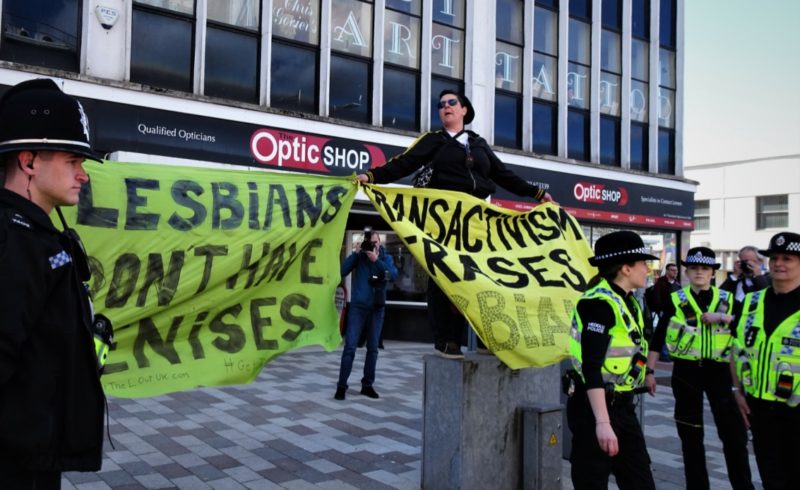 this Stockholm-like grip that “LGBTQ” has on lesbians, is exactly what’s led us to the point where emancipation is our only option. The irony of #droptheL is that we’ve already been dropped. While the letter L itself, is being held hostage, it’s strictly for optics at this point. As far as lesbians are concerned, the alliance is so over.

Jonathan Best, a gay man writing in solidarity with women, cautions gay men about their belief their human rights will be strengthened through alliance with transactivists. He argues that rather than uniting LGBT communities, the crude misrepresentation of women who claim the right to define their own bodies and sexuality divides LGBT people further.

In the last few months there have been repeated attempts to stop women from discussing their human rights with regard to the proposed changes to the GRA 2004. The transactivist mantra there is ‘no debate’ has included the attempt to starve Woman’s Place UK from having venues where women can meet and talk, in particular to stop a WPUK from meeting in Quaker Meeting Houses. The Quaker Gender and Sexual Diversity Community (QGSDC) has not only steadfastly refused to participate in a WPUK meetings to which they have been invited, they have hounded WPUK and other rights based organisations out of Quaker Meeting Houses stating:

We strongly challenge the misrepresentation, misinformation, disrespect and intrinsic antagonism towards trans by WPUK people in pursuing their stated aims around gender identity legislation (including the GRA) and want to highlight the hugely negative effect this is having on trans people’.

Recently Liverpool Meeting House cancelled a booking only hours before an event was to take place on the grounds it was ‘transphobic’. The talk was entitled: Exercising Professional Judgement on the Care of Gender Diverse Children. On querying this decision, the organiser was told it had been drawn to their attention the ‘panellists were transphobic’ and ‘the panel was against Quaker beliefs’. A professional panel of experts, including a Professor of Disability Studies , Michele Moore, who is highly respected in her field and who has fought for the rights of disabled people all her adult life, and Helen Watts, Former leader at Girlguiding UK who upholds the sex based rights of women and girls. They were forced to convene in a nearby public house bar to deliver their scholarly papers against a background noise of drinkers and next to the banging of the lavatory door which was in constant use.

In other words, the QGSDC within Quakers, in the name of gender and sexual diversity has, without any official remonstration of their exclusionary practices or their accusations, set up a dichotomy whereby the rights of those who identify as transgender and the rights of women and children are placed in irreconcilable antagonism. In doing so they align themselves with the power of nearly all institutions, including political parties, which bow and scrape to the mantra ‘Gender Identity Ideology Must Be Obeyed’. Over the centuries autonomous women who opened their mouths to challenge the patriarchy have been labelled numerous things – witches, bitches, sluts, harlots, man-hating lesbians and more. In this latest reincarnation we are still sexually name-called, but we are also called bigots and transphobes, despite the fact we unequivocally endorse the human right to identify as transgender.

Women are becoming increasingly alive to the concrete, detrimental reality of the politics of inherent ‘gender identity’ mobilised through an appeal to human rights. As things currently stand, it is the rights of women as delineated in the universal declaration of human rights and subsequent united nations conventions and declarations – freedom of belief (and freedom not to believe), freedom of expression, freedom of association, freedom of peaceful protest – and our freedom to claim our sex-based rights enshrined in the Equality Act 2010 which are traduced and under threat.