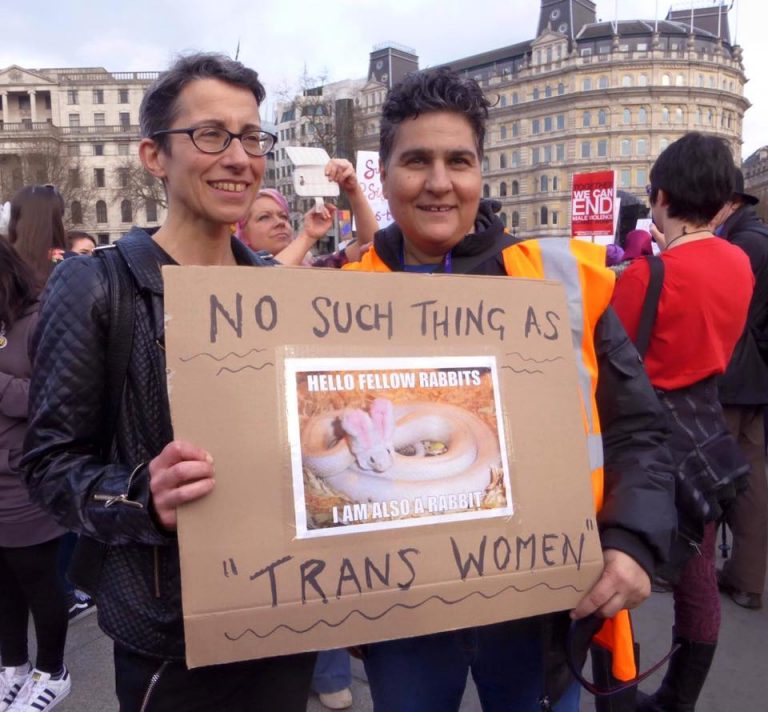 Remove the L from LGBT

We demand that Stonewall removes lesbians from the list of groups you claim to represent as a national LGBT organisation. Since its foundation, Stonewall has rarely represented our interests.

Now, in your single-minded campaign to promote the trans political and ideological agenda, you not only fail to represent us, but you actually promote lesbian invisibility – and lesbian erasure.

Lesbians are biological women who are sexually attracted to, and have sexual and emotional relationships with other biological women, only. Being a lesbian is primarily about sexuality: it is a same-sex attraction. Stonewall no longer accepts this basic, socially-accepted definition of lesbians. In fact it defines homosexuality as ‘attraction to the same gender,’ not biological sex.

As a consequence you support the absurd idea that male-bodied persons can be lesbians, and you demand that they be accepted as such by actual lesbians. If we refuse to accept these men as lesbians you label us transphobes and “TERFs”, unleashing a torrent of hate speech upon us from your supporters.

The vast majority of biological males who self-identify as lesbians retain their penises. So Stonewall is not only promoting hate crime against lesbians, but imposing compulsory heterosexuality on lesbians.

Stonewall does not recognise or represent the many young women who reject conventional feminine stereotypes in appearance and sex roles, and who become lesbians at puberty. Instead you support the trans argument that many gender non-conforming lesbians must really be men, born with “male brains” in the “wrong body”.
This outdated definition of lesbians was first promoted by male sexologists at the end of the 19th century. It has now become the dominant narrative.

In the absence of alternative information, young women are stigmatised and bullied into taking on a male identity, rather than being healthy young lesbians. As one young woman told the Lesbian Rights Alliance, ‘there was no one who looked like me or acted like me who I could turn to as a role model.’

In your support for trans ideology you are literally erasing young lesbians, telling them they must mutilate their own female bodies to impersonate men and appear to be heterosexual. In 2016-2017 female adolescents comprised over 70% of young people seeking to transition at the Gender Identity Development clinics, the majority of whom are attracted to their own sex.

In your educational programmes for schools you claim to address homophobic bullying, but none of your school materials represent gender non-conforming young lesbians.

For the few lesbians who have managed to escape lesbian conversion to trans and joined LBGT groups at college or university, they are often told that they should not use the term ‘lesbian’ since it is too ‘exclusive’. Instead they must define themselves as ‘queer,’ which means in practice that they must be open to having sexual relationships with men.

According to your website, Stonewall has an income of over £7 million in 2018. You also support numerous LGBT groups and LGBT youth groups around the country. Women-only and lesbian-only space is crucially important to lesbians in the development of our lesbian lives and lesbian community. Yet as far as we are aware you have not supported a single lesbian-only youth group, or supported lesbian-only groups of any kind.

It is clear that being ‘stronger together’ in Stonewall does not include lesbians. So we urge you to stop claiming to represent us and leave the L out.