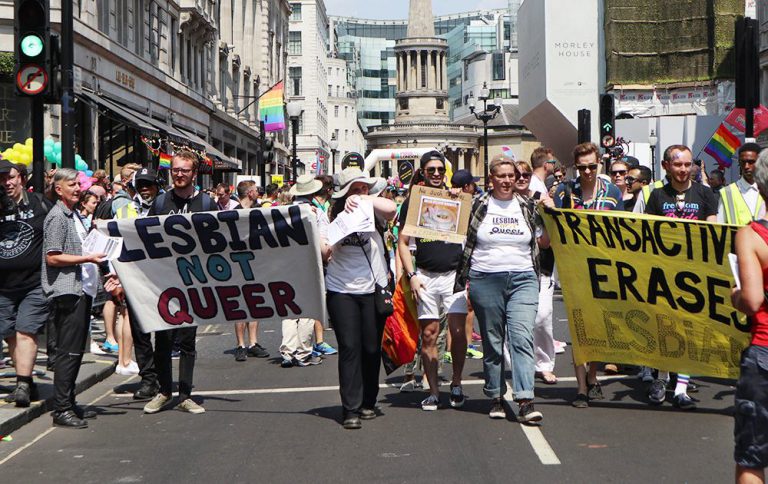 Yesterday I counted the women on the 2018 Pride in London website, the actual women — not the diva drag queens. In a tableau of thirteen images, there was one with some women volunteers, that’s a worse male to female ratio than the House of Lords. Pride is no more than corporate willy-waving; a chance for the big beasts of business to show how ‘woke’ they are with some rainbow-clad public relations. Those who exist in the shadow of the rainbow, are women like me — and we are angry. In an effort to bring Pride back to its protest origins, this year a group called ‘Get the L Out’ took action.

In an audacious move, lesbian feminist campaigners Get the L Out marched to the front of the Pride bearing banners with the words ‘Lesbian = Female Homosexual’ ‘Lesbian Not Queer’ and ‘Transactivism Erases Lesbians.’ Pride in London organisers asked them to move their ‘offensive’ banners and bystanders harassed and swore at the women.

The news that we are not one big happy LGBT glitter family has come as a shock to many of our well-meaning straight allies. I’ve enjoyed myself thinking of liberal journalists in newsrooms sweating over the vexed question as to who comes first identity politics scrum — lesbians or transgender people? The answer has been somewhat ironic — Get the L Out have had their inconvenient lesbianism ignored and the group have been lazily branded as ‘anti-trans.’

Perhaps a good place to start thinking about why ‘Get the L Out’ are apparently being big meanies to transgender people is to have look at the logic behind the slogans.

This surely is an uncontroversial statement, simply the dictionary definition of lesbian? Well, according to all of the mainstream LGBT organisations in the UK (and indeed the US) some lesbians have now have penises.

Over the past few years the numbers of straight men transitioning to become transwomen have sky rocketed. This is generally cited as evidence of a freer society where people are able to be their ‘authentic selves’ with the help of surgery and synthetic hormones. A more cynical approach might be that this is evidence of online pornography informing identities. It should be noted that even trans advocacy organisations like GIRES admit that around eighty percent of transwomen never have, or intend to have, surgery or to take hormones. As such, it is difficult to differentiate between men who identify as cross-dressers and transwomen who are ‘lesbians with penises.’

This is having a catastrophic impact on the already marginalised lesbian community. Lesbian dating sites and social groups are unable to exclude transwomen for fear of being accused of transphobia. Of course, for those who want to see themselves as female joining a woman-only group, or entering a woman-only space, is a quick fix to affirm an often largely internet-created ‘female’ identity.

Outside of shouty blue-fringed students the idea ‘some lesbians have penises’ is ridiculous. And yet powered by late-transitioning transwomen the law is at risk of being changed to make questioning this statement a hate crime. This attests to the power of the transgender movement, and arguably the sex of its most vocal proponents.

A Tumblr-inspired trend it is tearing apart the youth lesbian community; researchers estimate that 95–100 percent of the girls who identify as boys would otherwise grow up to be lesbian. Many are turning online to make sense of their feelings, and a dearth of information about female same-sex attraction is leading girls to conceptualise their discomfort in their growing bodies as evidence of being transgender.

Young lesbian and bisexual women are at particular risk of self-harm, and yet the organisations charged with their care including health professionals, schools, social services, even the Girl Guides, now accommodate practices such as breast binding for girls who identify as trans — to my mind this is enabling body hatred.

There is now an industry of ‘educational’ organisations that are actively teaching children that sex stereotypes are innate, and that if they don’t fit within them they can change their bodies. A guide produced by Gendered Intelligence offers the following advice to young people (16–24) ‘Surgery will affect sex in many ways but the most noticeable effect is a boost in body confidence. You may enjoy sex more as you begin to feel better about expressing yourself.’